You are here: Home / Defense + Security / Types of Pocket Knives 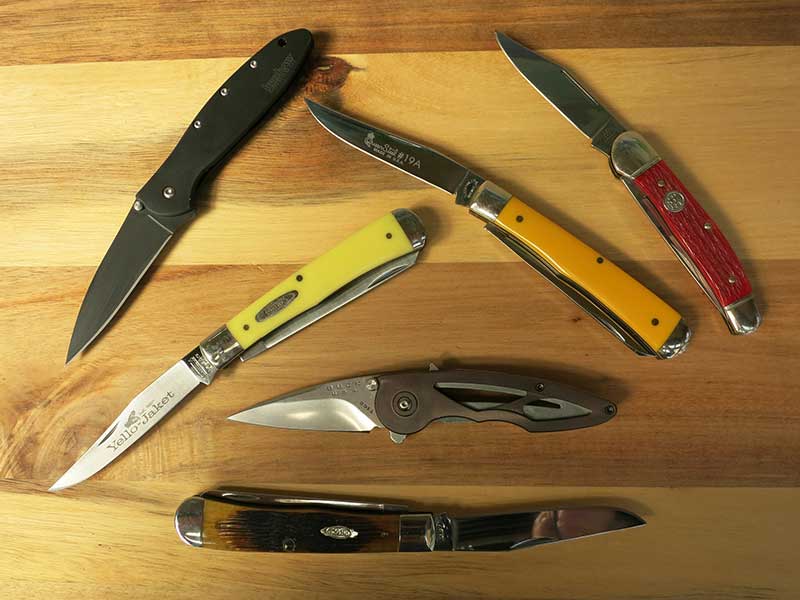 If you are in the market for a pocket knife, there are actually dozens of styles to choose from, all of which fit into one of two general categories: the slip joint pocket knife and the locking blade pocket knife.

In this article we will discuss the various types of pocket knives currently available for purchase, and provide a brief description of each type of knife. We will also talk about the history of the pocket knife—a history that actually began before pants had any pockets.

Early History of the Pocket Knife

Although it may seem difficult to believe, pocket knives have been around for quite some time—even before there were actual pockets to put them in. Pockets in trousers did not actually get invented until the 17th century, and the first pocket knife was actually invented thousands of years before. In fact, a bone handle folding knife dating from 600BC was recently found in Austria while several pre-Roman folding knives have been found in Spain.

The earliest pocket knives were small and folded, which made them safer to use and carry. The blades on these early pocket knives were constructed from iron or bronze and the handles were made from bone or wood. Unlike modern pocket knives, the blades of these early models did not lock into place. Instead, they swiveled on a pivot. To keep the blade open, the user had to hold the blade with the tang of the knife, much like one would hold a modern straight razor.

Although small folding knives date back thousands of years, the difficulty these early makers had at producing and finding iron made them very expensive and fairly rare, which precluded your average Joe from actually owning and using one. This all changed in the middle of the 17th century, and in the early 1650s, the folding knife would become a very common item.

It was around this time that a place known as Sheffield, England would become the pocket knife capital of the world (along with other cutlery). Owing to improvements in smelting technology, knives in Sheffield could now be produced rapidly, in-mass and very affordably.

One popular design from this era was a very simple folding knife with a wooden handle. It was used primarily by farmers, herders and gardeners, and because of this it gained the title “peasant knife.” It was also known as a penny knife because of its low price tag for the era.

Like some of the ancient pocket knives that had been discovered in various places around the world, the peasant knife had no locking mechanism. To keep the blade in place, the tang of the blade would fold back into the handle, and the user would hold both the tang and the handle together to keep the blade somewhat locked in place.

Other peasant knives relied merely on the friction between the blade and the handle to keep the blade locked in place when in use. The famous “Opinel Knife” is one example of a friction-based pocket knife.

While this setup worked okay for light work given the time, there was always a high probability that the blade would slip and thus fold back on the user’s finger. This was especially true when users attempted more rigorous work with the knife. To fix this problem, manufacturers tried many different options until they finally came up with the slip joint mechanism for a pocket knife.

Understanding the danger of relying on friction alone to keep the blade of the pocket knife open when in use, cutlery experts in England began experimenting with upgrades and modifications that would help lock the blade in place while in use and keep it closed when it was not being used. Several years later, in about 1660 or 1661, folding knives with a “slip joint” were born.

When looking at a slip joint knife one would think that the blade actually “locks” into place. This is not the case. Instead, the blade is held open by tension. Here is a brief description of how the slip joint knife worked (and continues to work):

In fact, the slip joint was used all the way into the late 20th century and beyond and is still used somewhat today, which means it is highly likely that the very first pocket knife you ever owned was a slip joint knife of some kind. Here are just a few types of pocket knives that use the slip joint mechanism:

As the name suggests, the Barlow knife was created by a man named Barlow in England. The design of this knife features an elongated oval handle, a clip point and a pen-style blade. While the Barlow knife was invented in the UK, it became very popular in the U.S. In fact, the mother of our first president once gifted a young George Washington with a Barlow knife as a reward for his good behavior.

The Camper knife, which is also known as a multi-tool or Swiss Army knife, is equipped with many different types of blades for performing different functions. These knives also have a variety of tools that come in very handy while camping, such as scissors, a can opener, bottle opener, screwdriver and more.

Equipped with two different blades that open from opposite ends, the canoe knife gets its name for the way it somewhat resembles a canoe. Most canoe knives are equipped with a drop point blade and pen blade, but there are a variety of other combinations that are also available in the canoe knife style.

One of the most classic and oft-used of the slip joint style of knives, the Congress pocket knife is equipped with four different blades. With most Congress style knives these blades are the spear point blade, the sheep’s foot blade, the coping blade and the pen blade, making them very useful for a number of different projects.

Other types of slip joint knives include the pen knife, the peanut knife, the stockman, trapper and the sodbuster, among others.

All of the above-named knives belong to the slip joint category of pocket knives, but there is another category of knives called the locking blade knife that is very popular indeed.

The first folding knife with a locking blade was invented in Spain in the 1600s, but it would take over 300 years for the lock blade pocket knife to become a standard fixture in the world of cutting tools.

The popularity of the locking blade knife can actually be credited to an American man named Al Buck, who owned a knife company with his son. During World War II, this company made locking blade knives for American soldiers, and when the GIs came home he started reducing the size of these fixed blade knives into those that could fit easily into one’s pocket.

Buck began developing a folding pocket knife that provided the stability and security of a fixed blade knife, and in 1964 he introduced the world to a legend: the “Buck 110 Folding Hunter locking blade knife,” which would popularly become known as the Buck knife.

Much like the slip joint knife, the locking pocket knife, or Buck knife, has a strong back spring that is positioned along the back side of the knife. The difference is that on a locking blade knife the back spring has a small hook that snaps into a corresponding notch in the blade’s heel when the blade is fully open and engaged.

This locks the blade into place. Then, to release the back spring’s hook from the blade’s heel notch, the user has to apply pressure to the spring located near the end of the knife’s handle.

In addition to the Buck knife, many of today’s tactical pocket knives are made with a locking blade.