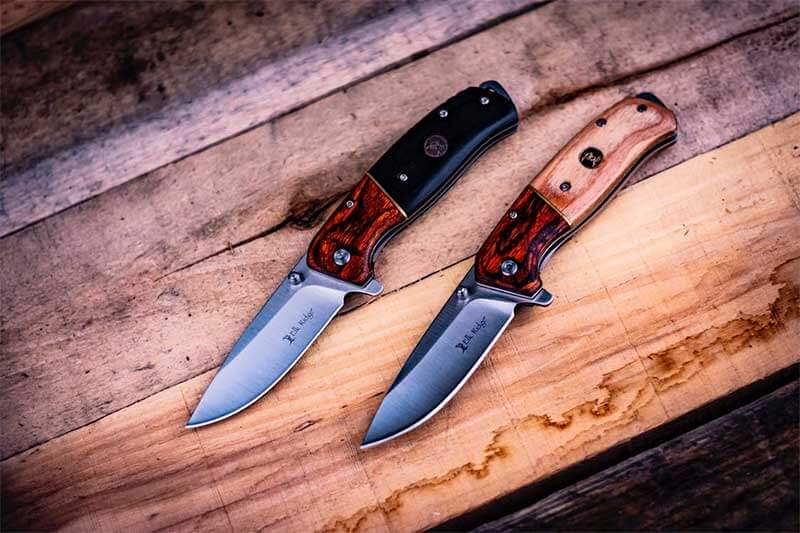 There are many types of fixed blade knives on the market—non-foldable knives that come in many different styles, shapes and lengths. In the following article we will introduce you to a wealth of different fixed blade knife types and describe the various characteristics associated with each.

Fixed blade (non-folding) knives are designed for dozens of different tasks and applications. There are many different types of fixed blade knives, including hunting knives, survival knives, combat knives, boot knives, dive knives, throwing knives and more. Here we have compiled a list of the various fixed blade knives currently available for purchase, with a brief description of each knife.

A Bowie knife is a heavy sheath knife that boasts a long, single-edged blade (non-serrated). Bowie knives are typically larger than the majority of other fixed blade knives and their cutting power and strength is quite impressive. Bowie knives are available in blade lengths between 6 inches and 24 inches and can be used for a variety of scenarios. For example, as a hunting knife, the Bowie knife gives the hunter plenty of cutting strength for skinning and field dressing prey. The comfortable grip associated with the Bowie knife makes it easy to penetrate hard to reach places on a kill. Bowie knives can also be used for self-defense and in combat situations, provided you have the right training. As a survival knife, the Bowie knife has many advantages. Its tremendous cutting power makes it ideal for cutting branches to make shelters, and it can also be used to find and kill food.

As the name suggests, a hunting knife is a knife used primarily by hunters. Its main purpose is for preparing the game to be used as food: skinning and cleaning the animal and cutting up the meat. This is different from the hunting dagger, which is mainly used to hunt and kill animals. Some hunting knives are adapted for other uses in the wild—uses other than preparing and cleaning game. For instance, a camp knife is a type of hunting knife that hunters can use as a machetes or hatchet when those specific tools are not readily available. In this case, their functionality would double as a survival knife.

Although Bowie knives and hunting knives can be used in survival situations, if you plan to hike or backpack alone in an area where it is possible to get trapped it is crucial that you have a designated survival knife.

Survival knives are knives intended for emergency situations in a wilderness environment, usually when the survivor has lost most or all of his main equipment and gear. Most people who spend a lot of time in the mountains, forest and desert should carry a survival knife, and military units equip pilots with survival knives in the event they are shot down by the enemy. Survival knives have many unique functions that make them invaluable in a survivor situation. They can be used for wood cutting, skinning, trapping, carving and more. Fixed blade survival knives tend to be heavy bladed and thick with a single edge, while other types have both a straight and serrated edge.

The survival knives of today tend to have a number of cool features, such as a “full tang,” meaning the metal knife blade and handle are made from one solid piece of metal. Survival knives can also have a hollow compartment in which to put things like matches that you need to keep to dry. Other features include a flat-back ridge that can be used as a “steel” when trying to create fire, and a pointed tip for hunting prey.

The Bushcraft Knife and Survival Knife are essentially one in the same. Both are fixed blade knives that typically have a single edge blade, although the handles or hilts of the knives can vary from one knife to the next. Bushcraft knives are meant for medium to light duty tasks in a wilderness setting, including, but not limited to:

A combat knife is a single-bladed and sharp-pointed knife. As its name might suggest, the combat knife is designed exclusively to be a fighting knife—a knife issued to military personnel for the purpose of hand-to-hand fighting and close combat situations. Since the end of trench warfare, many of today’s modern combat knives have been designed for additional purposes. Some of these include:

Because of the other functions combat knives can be used for, they are now referred to as combat utility knives by some branches of the military.

Formerly known as a trench knife, the “combat knife” was utilized by both sides on the Western front during World War I. Since that time, combat knives have been issued by the armies of many nations, and versions of those combat knives are now in public circulation, sold by many a knife dealer to the general public. Though they differ in detail, they all share the common characteristic of being purposely designed for military use, with their primary role as a close-quarters combat weapon.

A throwing knife is a tapered knife with a double-edge blade and a very sharp point. This type of knife is specifically designed and weighted so that it can be thrown at a target effectively. Not your ordinary knife in design or purpose, these knives truly make up a class of their own.

Although not as popular in the Western world, throwing knives are used by many cultures around the world, especially in many Central African nations. They can be used for hunting and in combat, as well as for sport, as there are many knife throwing competitions that test people’s skills with these types of knives.

A boot knife is a type of fixed blade knife that is secured on the lower leg with a sheath that is then attached to the boot by a short piece of cordage. There is no hard and fast rule when it comes to the length of a boot knife, but keep in mind that you will want the knife to be constantly concealed—that is the point of wearing it in this way. A good rule of thumb is to go with a boot knife that is about 3-5 inches in length.

Although any person that is authorized can wear a boot knife, the type that is typically worn by military personnel and law enforcement officers generally has a dagger-style blade with a double edge. The point of the knife should be very sharp—sharp enough to penetrate when it comes time to use it. Boot knives are typically made from the strongest steel materials with a simple handle that is easy to conceal.

Last but not least, a dive knife is a very important piece of scuba gear that could potentially save your life. These fixed blade knives can be made from a variety of materials, including steel, titanium and even ceramic. They typically have a single-sided blade that is very sharp and a medium to sharp tip at the end. Many divers carry a dive knife to protect themselves from underwater predators, and to cut themselves out of entanglements they may find themselves in. Dive knives can also be used as digging tools underwater to uncover something from the sea floor.