You are here: Home / Gear + Supplies / Add The Best Ham Radio For Preppers To Your Bug-Out Bag 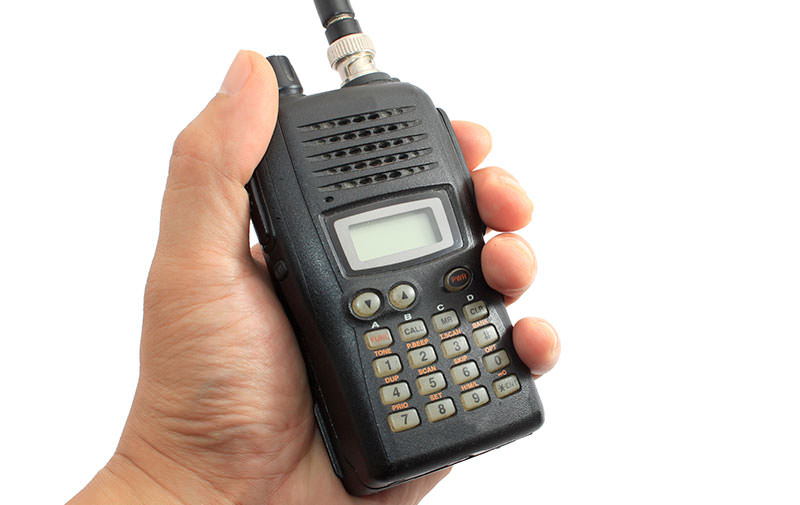 When phone lines and other standard forms of communication go down in an emergency situation, how are you going talk with your family and others? You can’t even count on cell phone towers to work, or at least to not be overloaded with everyone else trying to make calls. That’s why you need a ham radio to keep your lines of communication open and keep yourself, and your family, safe if the SHTF in a disaster or emergency situation.

If you want to prepare for survival situations, then we suggest getting yourself a good ham radio, like the ones we recommend below. And for disasters and emergencies, you don’t need a license but we’ll cover a bit about licenses in case you want to become a hobbyist ham radio operator.

Some links on this page are affiliate links. If you click through and make a purchase, we may earn a commission, at no additional cost to you. Learn more here.
Editor’s Pick:

What Is A Ham Radio?

Ham (or amateur) radio describes the set of equipment and processes used to broadcast in various methods on radio frequencies set aside for use in non-commercial settings. Examples include broadcasting as a personal hobby, experimentation and emergency communication.

The hobbyist side of ham radio operating has waned with the adoption of the Internet. There is no doubt that a committed group still actively participate in traditional radio sport activities. A growing number of groups, individuals, and communities have become interested in the use of ham radio equipment as a method of communication in emergency situations. When disasters both manmade and natural hit rural and out of the way places, a ham radio setup along with a power generation plan can help ensure a quick and efficient emergency response.

A standard ham radio setup, for a 2 meter station, will have a transceiver, power supply, power meter, cable, and antenna. A license is also required to broadcast on ham radio bands.

The first decision to make is which license to get. Today, three categories of licenses are available through testing procedures. Tests are usually handled by community ham radio enthusiast groups. Each category has its own exam. Those categories are Technician, General, and Amateur Extra. By passing the exams more frequencies and methods are opened up to the user.

Morse code is no longer required in order to be licensed for amateur radio broadcasting. One consideration making many operators decided to learn and practice morse code is that it is a reliable form of communication over long distances, is not language dependent, and leaves little room for interpretation. So if the primary use of a ham radio setup will be for emergency situations, morse code would be a part of a comprehensive plan.

The Technical class license is what most everyone starts out with. This allows access to the basic 50 MHz and higher band waves. Most operators take each test progressively, getting familiar with the operations of one level before preparing and testing for the next.

For a comprehensive emergency plan, someone will need to have an Amateur Extra license, meaning that person will have had to pass all the tests. The Amateur Extra license opens up the morse codes bands to the user, which will certainly be used in the most serious of emergencies.

While this section will be just an overview of the basic ‘stuff’ needed and some things mentioned may need further research, here’s what’s hoped to be an uncomplicated outline for the serious ham radio enthusiast who wants a top of the line setup as a beginner.

Starting back to front, the antenna will require some planning as to what will be the best for a particular situation. Here’s the soup of choices to work together into an operational antenna array. Will the antenna be stationary or need to be moved around?  Does it need to be vertical or directional? What are the best choices for a transmitting and receiving antenna?

This is the most difficult part of the ham radio setup to build. For those planning emergency usage, the best plan, if possible, would be to have a variety of antenna options prepared. For example, a dipole antenna is essentially a long wire strung between a high distance, like a tree or a building. Once understood they are cheap, easy to move and quick to assemble, though they are easily destroyed by high winds, so a stationary array should be the first line of defense. The stationary antenna is the one thing the vast majority of people see in their minds when they think of ham radios – the tall and wiry pole standing in the ground and rising above the treeline.

Once the antenna pole, wire, etc, is sturdy, it will need to be tuned. Tuning is another challenge, some will say the hardest. But since over three-quarters of a million people have gotten licensed and built a ham radio setup, it’s not impossible. An SWR meter can usually be borrowed by a nearby operation. The meter tunes for the specific frequencies that the ham radio transmissions will be broadcasted on.

As for cables, an AC to DC power supply will be required, something similar to how a notebook cord functions. A coaxial cable will be needed to run from the antenna setup to the transceiver.

The term transceiver is a combination of transmitter and receiver. It’s the core unit of a front-end ham radio equipment setup. The typical unit is 100 Watts with multi-mode and multi-band capability. This means that it can send and receive messages over multiple bands such voice, digital and morse code over the complete range of frequencies available to ham radio operators.

A basic transceiver (or rig) runs between and $300 and $800. As an example, a used $300 rig made by Icon can be found fairly easily on sites like Craigslist or eBay. Newer models, of course, run more and are harder to find in the used market.

Other accessories, and the skills that go with them, that will be needed for construction of the antenna array and connection to a power setup, and to the transceiver, will be a soldering iron, wire cutters, strippers and a heat tool.

As obscure and difficult as this must sound to someone who is not familiar with ham radio, or never considered its current significance, will find many willing advisers, helpers, teachers and coaches in the amateur radio community.

Once one, or hopefully, several people in a community become familiar with ham radio and how it works, and build a setup, the better informed the wider community will be in an emergency situation. More importantly, if in a disaster all other modes like landline, cell and internet are out, ham radio will communicate needs to first responders, helping to get a more efficient response for everyone’s needs.